Understand what an API proxy is and the benefits of using it.

In general, a proxy is something that acts as an agent or intermediary for something else. An API proxy provides an interface to developers for accessing backend services and sits between the application and the backend.

An API proxy acts as a handler between a consumer and backend services. It is a shim (layer of code, which provides compatibility between different interfaces), which handles data transformations, security, routing, and more. It exposes an interface customized for the consumer (web, mobile,...), makes the API calls to the different backend services on behalf of the consumer.

💰 Start your cloud journey with $100 in free credits with DigitalOcean.

Let's look at some examples:

An API proxy is an intermediary and helps a consumer get the data from backend services, without having to talk to all the services directly. It is a layer of abstraction between the consumer and the backend.

The API proxy pattern allows to expose a stable interface to the consumers. If a backend service changes, the adaptions can be made in the API proxy layer without having to change how the frontend consumes data. An API proxy also allows an easy implementation of caching of expensive calls to backend services and can improve performance. The downside is that latency between backend and frontend will be increased minimal. 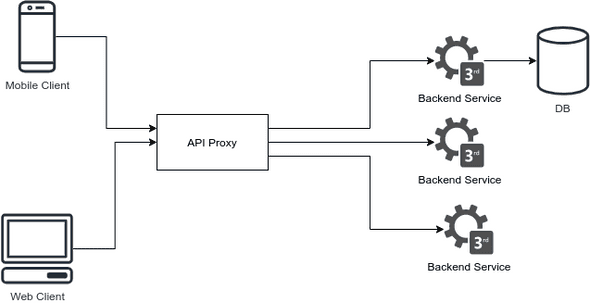 Structure of an API Proxy

Thanks for reading and if you have any questions, use the comment function or send me a message @mariokandut.

If you want to know more about Node, have a look at these Node Tutorials.

References (and Big thanks):

How to handle binary data in Node.js?

Handle binary data in Node.js with the Buffer constructor

How to use streams to ETL data?

Learn how to use streams to extract, transform and load data

How to connect streams with pipeline?

Learn what pipeline does, and how to connect streams using pipeline

How to handle binary data in Node.js?

How to use streams to ETL data?

How to connect streams with pipeline?

How to handle stream errors?

How to connect streams with pipe?

What Is a Node.js Stream?

Introduction to errors in Node.js

How to set up SSL locally with Node.js?

How to use async/await in Node.js

How to make an API request in Node.js?

How does the Event Loop work in Node.js

How to wait for multiple Promises?

How to organize Node.js code

How does the Node.js module system work?

Set up and test a .env file in Node

How to Use Environment Variables in Node

How to clean up node modules?

How to update a Node dependency - NPM?

What are NPM scripts?

How to uninstall npm packages?

How to install npm packages?

How to create a package.json file?

What Is the Node.js ETL Pipeline?

What is data brokering in Node.js?

How to read and write JSON Files with Node.js?

How to install Node.js locally with nvm?

How to update Node.js?

How to check unused npm packages?

What is the Node.js fs module?

What is Semantic versioning?

The Basics of Package.json explained

How to patch an NPM dependency

What is NPM audit?

Getting started with Node.js